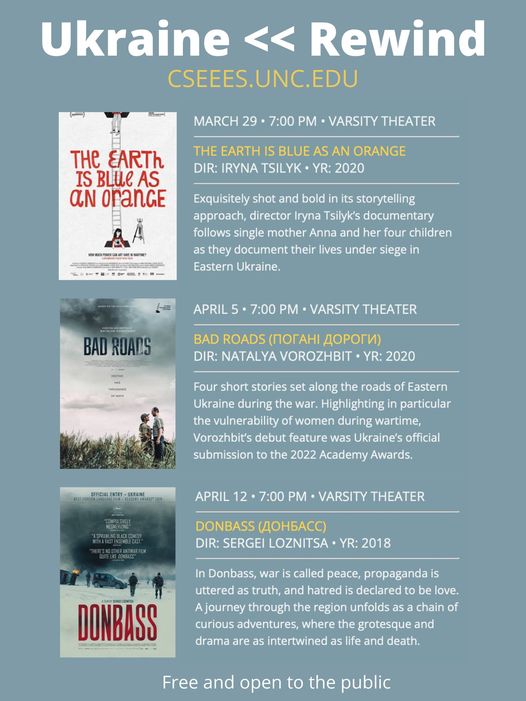 The Center for Slavic, Eurasian, and East European Studies at the University of North Carolina at Chapel Hill is hosting a film series of Ukrainian movies at the Varsity Theater on Franklin Street.

The movies are free and open to everyone. We hope to see everyone there!

Ukraine << Rewind presents a curated selection of films by Ukrainian filmmakers about the war in Ukraine since 2014.

Before the Russian invasion a month ago, the conflict in Eastern Ukraine between pro-Russian separatists and the Ukrainian army had already claimed over 14,000 lives and forced more than 2 million people to flee their homes. Entire communities had been displaced, families torn apart, cities destroyed. These films offer a glimpse into that world with powerful stories about people who continue to fight for their freedom and dignity.

Looking for a job for Ukrainians

Ukraine is under attack!

Help us to help Ukraine

You've got questions and we have the answers

Who are Ukrainians in the Carolinas?

We are a network of volunteers throughout the Carolinas dedicated to assisting the people of Ukraine and promoting Ukrainian culture in the Carolinas. Our network has been operational in the Triangle for the last 8 years, ever since Russia invaded Ukraine. We have been collecting and shipping medical supplies to Ukraine, helping refugees, wounded warriors, families of perished Ukrainian heroes and orphans. We have hosted numerous cultural events and advocated for assistance to Ukraine. Since February 24, 2022, when Russia started its new phase of war in Ukraine, we have become an even stronger and larger group and welcome your support. We have media coverage, politicians’ attention, but most importantly - everybody’s willingness to help Ukraine’s brave military and citizens. We already shipped several containers of medical supplies, so generously donated to us by local supporters of Ukraine and of freedom. We also provided localized support to various cities throughout Ukraine where there was a great need for food and medical supplies.

What is your status? Are you an officially recognized charitable organization?

Where can I send my monetary donation?

You can write a check to Ukrainians in the Carolinas or PayPal or Zelle your donation to donations.ukrainians.carolinas@gmail.com

Can I donate clothing or other goods?

At the moment, the border is overwhelmed with various humanitarian supplies from European nations, so we are focusing our efforts on securing and shipping medical supplies only.

What else can I do to help in supporting Ukraine against the Russian invasion?

Spread the word! Contact your elected representatives and ask them to provide air defense systems to Ukraine, expedite legislation to allow Ukrainian refugees into US, and secure humanitarian corridors into sieged Ukrainian cities.

I have a press inquiry or want to schedule an interview

Please email us at ukrainians.carolinas@gmail.com